Not so fast, says Andrew Harhay; the final vote count shows a TIE!

Tonight, June 14th, at 18:30 hours, the Board of Selectmen conducted an emergency meeting. The reason, we failed to elect a new member for the Board of Selectmen.
Attending the emergency meeting was Larry Mandel, chairman of the Board of Selectmen (“BOS”), Andrew Harhay, incumbent member of the BOS, Bettina Schmidt, who was announced as the winner of the election for the seat on the BOS last night by two votes, and Sharon Ashleigh, the town clerk.
During the emergency meeting, Sharon Ashleigh explained how it came to be that there is now a tie where there was a winner last might. Sharon explained that five individuals voted on a provisional ballot. Provisional ballots are created by individuals who's name does not appear on the cross-off list (list of all the registered voters) but which insist that they are registered voters. Such provisional ballots are not run thorough the voting machine as their claim to be registered voter first needs to be verified by the town clerk. Hence, these votes were not included in the count published last night.
Sharon, “Paula wanted to set up tables and I needed to get out of there (the Community Center) last night,” and, “at eight o´clock I had other things on my mind and forgot about the provisional votes..”
Early today, Sharon checked the five individuals voting status and determined that one was not a registered voter, two had registered too late, and the last two were registered voters but had moved within the town. This the reason why the two names were missing on the list of registered voters. She apologized for this oversight to the two candidates.
The question was then what to do about the tie. There are not many options: Either candidate has 10 days to request a recount. Depending on the outcome, the recount will establish a winner, or, the town will organize a special election.
Peter Frei.

A total of 311 voters made the annual trip to the Holland Community Center to exercise their constitutional right to participate in forming the government of their community. (Last year the count was 465.)
The annual town election took place at the Community Center for the second time, read more»

I was going to publish the results here as usual...
Sharon Ashley, our town clerk, refused to give me a print-out and added, The results will be published on the town's website.
How about those people who do not have a computer? It seems to me that they don't want you, the reader of the Holland Blog to have it first. I tried, sorry! Ask your self the question, how much of an effort would it be to tape a print-out of the results at the door to the town hall as they always did?
So much I heard from an informed source, Bill Hardy will keep the job he had for years, moderator (thank god! Steven Anderstrom did not get his way.) Harhey did not make it either (he lost by two votes!) Bettina Schmidt is our new member of the Board of Selectmen, congratulations! Scotty defeated Richard Polverari.
Peter Frei

Say Yes to Public Health Protection and NO to RECALL. 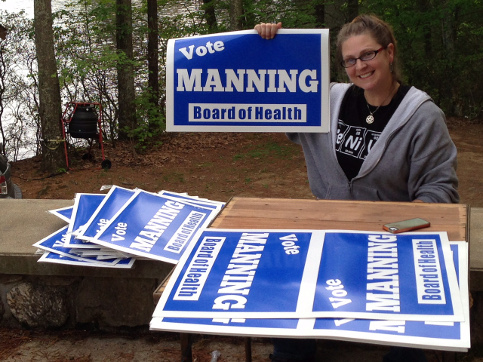 At the time I prepared my campaign signs in June of 2014, I had no idea that serving the community with integrity would lead to me being recalled based on lies by a small group of corrupt disgruntled town officials, read more»

A total of 465 voters made the annual trip to the Holland Community Center to exercise their constitutional right to participate in forming the government of their community. (Last year the count was 437.)
The annual town election took place at the Community Center for the first time, read more»

Please make the time to vote, for the first time the elections will take place at the Community Center by the cemetery.
It is important that those who don't really care get out there because the selfserving individuals who profit from corruption for sure will make the effort.
A special message to Kristin LaPlante; your notion that informatative election fliers based on facts are hate mail is missconceived and shows an utter disrespect of the democratic process on your part. This is the reason why you and those close to you are a danger in any position you are holding in our community.
We go back a long time; not many remember town clerk Robert Ford which you replaced in 2004. I remember Kristin Grant, your maiden name, as an innocent single women with a strong need to belong. You do belong now and there is not much we still have in common.
As always, I make up my own mind about a newcomer. Sharon Ashleigh was a newcomer. However, lately I was forced to realize that she already belongs too... she belongs to the point where she is unable to do her job. If the town clerk refuses to comply with Public Information Requests and witholds the information for more than 40 days when the law mandates her to comply with such a request within 10 days, she becomes a danger to our community as well. The information I requested will be useless by then.. The right to file Public Information Requests is one of the strong pillars a free society is based on. Public Information Requests are enabeling and ensuring public involvement and participation by providing a mechanism for holding governmental actors accountable for their decisions and actions.
Kristin, you obviously are a strong leader and mentor and had a chance to intorduce Sharon into the many responsibilities a town clerk has. Unfortunatelly that strong lead was pointing in the wrong direction!
Experience in the hands of a person with a strong moral compass is a good thing; in the wrong hands, it will spell disaster (unnecessary costly lawsuits.) Sharon Ashleigh seems to have that experience already (pushing the limits to see with what she can get away with, and in this town it seems to be endless), at least that is what she is claiming on her campaign signs.

Please attend the Annual Town Meeting next Tuesday, May 26, at 7:00 pm at the Holland Elementary School

It seems to be unclear whom to believe, Dana Manning or Brian Johnson, read more»

The Holland Blog just learned that member of the Board of Selectmen, Michael Kennedy, in a surprise move resigned from his position.
Is this a tactical move to help his buddy James Wettlaufer to get back into the race?
Will the voters at the caucus next Tuesday, now nominate two candidates to serve on the Board of Selectmen?
There will be no meeting tonight for lack of a quorum. Larry Mandell is unable to attend for personal reasons.

Zoning Board of Appeals lack of integrity indirectly responsible for recall initiated by David Kowalski, Brian Johnson, and James Wettlaufer

In their mailer David Kowalski, Brian Johnson, and James Wettlaufer sent to all registered voters, they claim, “read the full story of their alleged abuse of power and attempt to deprive a Holland Resident of fair treatment by the Zoning Board of Appeals.” The “resident” who “allegedly” was “deprived” is no other then Brian Johnson, our elected Highway Surveyor! I hope that I do not have to explain the definition of the word “deprived,” nothing could be further from the truth.
The Johnson family has a history of illegal land conveyance and illegal land-use and Dana did what the members of the ZBA where unwilling to do; end the preferential treatment of the Johnson's and others and ensure that everybody is treated the same. Dana Manning was informed by the ZBA in the course of “ official business” as required by M.G.L. and local bylaws of an attempt by Brian Johnson to procure another permit which is outside the law. In her answer, as a member of the BOH, Ms. Manning did not “attempt to deprive” Johnson of a permit; she made the ZBA aware of the fact that issuing the permit would be illegal! Ms. Manning just did the right thing, nothing more or less. Manning serves the community with integrity by following the law and by ensuring that everybody stays within the law; including members of the Johnson clan.
Many corrupt individuals (including members of the ZBA) are not willing to change, hence, Dana Manning, one of the very few town officials who serves with integrity had to be smeared and a recall effort based on deception and lies had to be launched.
Kowalski, who owed property taxes and has a hard time paying his taxes over the last years in a timely fashion, to this day, refuses to turn over his personal flash-drive (a digital memory attached to his personal computer) to the Board of Health so all members of the board would have access to the official record and would have an opportunity to engage in healthy “checks and balances” and check what kind of moneys Kowalski collected for permits he issued or which permits he not issued over the last 12 years. Thousands of Dollars in revenue to the town were not collected over many years or are missing! Ference and Manning have no way of knowing what was collected and what was not. An utter lack of leadership allowed this situation to go on for more than a decade! Repeated requests to the Board of Selectmen, the Holland Police, the State Police, the Attorney General's office, and the Secretary of State did not resolve this serious issue. To read Dana Manning's letter to the Secretary of State click here! Access to town counsel was also not allowed and the request to the Secretary of State only persuaded Kowalski to quietly deposit hard copies of minutes at the BOH office, and still retained private control over electronic copies of minutes and all the rest of the record. Dave Kowalski's action holding all the records hostage is unlawful; what does Kowalski have to hide? What does he lose with Ference and Manning on the BOH?
For the last decade Kowalski was running a “one man show” without any possible checks and balances. Why is nobody forcing him to turn over the flash drive? And Kenneth Ference and Dana Manning are the ones that are recalled?? Sometimes I do get the impression that most town officials are afraid to do the right thing as they risk of getting exposed themselves if they do by other town officials.
The ZBA's unwillingness to follow the law and to refuse to grant preferential treatment to Brian Johnson is indirectly responsible for the situation, read more»

Rebuttal to Dave Kowalski's recall by Board of Health chairman Kenneth Ference.

Please read the account of events that forced Kenneth Ference to take over as the chair person and angered Dave Kowalski to the point where Kowalski, together with former chairman of the Board of Selectmen and angry Brian Johnson teamed up and fabricated a libelous recall affidavit to mislead the community into supporting the baseless effort, read more»