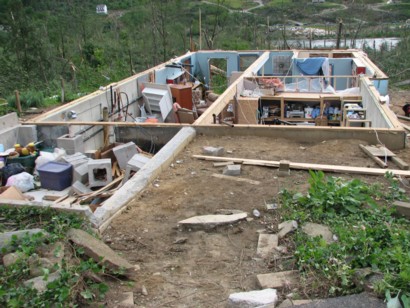 Pictured on the right:
Foundation of house on Page Hill Road in Brimfield. In the far upper corner is a pile of rubble to see, the remains of a former house on Wales Road near a pond.
Click on image to enlarge!
An unprecedented Tornado devastated along his 39 mile path of destruction communities between Westfield and Charlton, read more»

Posted on 7 Jun 2011, 13:46 by Peter Frei
I agree..
I agree with "Lindsey," this is not the time to ponder about old (empty) underground fuel tanks, (I assume that's what "Sick of scofflaws" is writing about.)
The YouTube video is impressive; the first account of the devastation left by the tornado. The dark sky is still visible to the east.
The video, at the time I posted this comment, was watched 185,776 times!!

Posted on 20 Dec 2021, 2:29 by You Need A Reality Check
Grow up, you ignorant fool.
there's something wrong with you, belittling survivors of a tornado. i guarantee you wouldn't be concerned about your language if you were in the midst of a half-mile wide F3 tornado like they were. get off your high horse, you jackass. the fact that you focus on something as petty and insignificant as vulgar language in such a serious situation is ridiculous, and goes to show your ignorance and privilege. and your insensitivity towards someone who lost a family member in the tornado is disgusting and subhuman. people's homes were destroyed, and their lives changed forever. downplaying the tornado as "urban renewal" is shamefully unempathetic and goes to show how mindlessly out-of-touch you are. trying to portray the storm in a positive light because it "creates jobs" due to cleanup work is a terrible mindset to have. hopefully you have matured in the decade or so since you wrote that idiotic comment.
_________________________________________________________________