Keith Herman and Holly Lawrence organized and participated in the second part of the Holland Rod and Gun Clubs annual fishing derby. Holly, Keiths fiancée of 25 years, was also running the administrative part of the first half, which took place last Saturday. 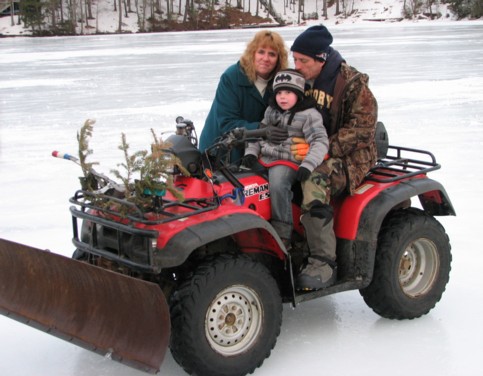 Keith Herman was elected Vice President of the Holland Rod and Gun Club just this past Sunday.
He is a lucky man; Holly is about the sweetest woman I know. Holly intends to have the Friendly Family Fishing Derby (FFFD) once a year because she had so much fun today (her daughter Nicole and her family were also present).
Among their many friends on the ice was newly elected member of the HRGC Board of Directors Scott Cable.
In the picture from the left to the right: Holly Lawrence, Keith Herman, and grandson.
Peter Frei